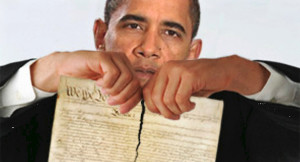 Obamatrade  is not about trade and never was. It’s sold as a magic elixir that will cure all ills – Jobs! Prosperity! World Peace! – but in fact it’s a toxic brew that weakens the American body politic and the Constitution. Obamatrade undermines our national sovereignty and that’s what it was designed to do.

The historical record is clear: what are misleadingly called “free trade agreements” were never really about trade. Their goal is to render independent nation states ruled by sovereign governments null and void, and hand power over to unaccountable, transnational corporatist authorities.

This is not a plot lifted from a Bond supervillain, but precisely what a powerful State Department official told a Congressional hearing in 1967.  And much of what he laid out nearly 50 years ago has come to pass under both Democratic and Republican administrations.

We can thank journalist and researcher Matt Stoller for uncovering the origins of Obamatrade (aka fast track for the TransPacific Partnership), the latest corporatist power grab, and its predecessors NAFTA and the World Trade Organization.

George Ball, a globalist of the first water who kept himself busy on Wall Street when he wasn’t Undersecretary of State for presidents Kennedy and Johnson, had a Just Between You and Me moment with the Congressional Joint Economic Committee in 1967.  Ball laid out his plan for a world managed by multinational corporations, “one of our major accomplishments” that “for the first time in history man has at his disposal.”  That entailed doing away with those pesky little things known as “individual national governments.”

“[T]he widespread development of the multinational corporation is one of our major accomplishments in the years since the war, though its meaning and importance have not been generally understood. For the first time in history man has at his command an instrument that enables him to employ resource flexibility to meet the needs of peoples all over the world. Today a corporate management in Detroit or New York or London or Dusseldorf may decide that it can best serve the market of country Z by combining the resources of country X with labor and plan facilities in country Y – and it may alter that decision 6 months from now if changes occur in costs or price or transport. It is the ability to look out over the world and freely survey all possible sources of production… that is enabling man to employ the world’s finite stock of resources with a new degree of efficiency for the benefit of all mankind.

But to fulfill its full potential, the multinational corporation must be able to operate with little regard for national boundaries – or, in other words, for restrictions imposed by individual national governments.

To achieve such a free trading environment we must do far more than merely reduce or eliminate tariffs. We must move in the direction of common fiscal concepts, a common monetary policy, and common ideas of commercial responsibility. Already the economically advanced nations have made some progress in all of these areas through such agencies as the OECD and the committees it has sponsored, the Group of Ten, and the IMF, but we still have a long way to go. In my view, we could steer a faster and more direct course… by agreeing that what we seek at the end of the voyage is the full realization of the benefits of a world economy.

Implied in this, of course, is a considerable erosion of the rigid concepts of national sovereignty, but that erosion is taking place every day as national economies grow increasingly interdependent, and I think it desirable that this process be consciously continued. What I am recommending is nothing so unreal and idealistic as a world government, since I have spent too many years in the guerrilla warfare of practical diplomacy to be bemused by utopian visions. But it seems beyond question that modern business – sustained and reinforced by modern technology – has outgrown the constrictive limits of the antiquated political structures in which most of the world is organized, and that itself is a political fact which cannot be ignored. For the explosion of business beyond national borders will tend to create needs and pressures that can help alter political structures to fit the requirements of modern man far more adequately than the present crazy quilt of small national states. And meanwhile, commercial, monetary, and antitrust policies – and even the domiciliary supervision of earth-straddling corporations – will have to be increasingly entrusted to supranational institutions….

We will never be able to put the world’s resources to use with full efficiency so long as business decisions are frustrated by a multiplicity of different restrictions by relatively small nation states that are based on parochial considerations, reflect no common philosophy, and are keyed to no common goal.”

Ball told the congressmen the EU provided the roadmap to the “imagine there’s no countries” borderless world he envisioned. Economic integration would make nations an empty exercise in symbolism, since all important decisions would be beyond the purview of national authorities.

If this were a James Bond film, after revealing his nefarious plan for world domination, George Ball would have activated a needlessly complicated death trap to dispatch the congressmen. However, this being Washington not Hollywood, Ball didn’t then unleash a congregation of hungry alligators, but David Rockefeller, the High Priest of the Eastern Establishment.

Rockefeller made the case for merging North American economies (NAFTA anyone?), getting rid of non-tariff barriers (a fancy term for national standards), and giving the president fast track negotiating power so Congress couldn’t get in the way.

Pretty much everything George Ball and David Rockefeller laid out has come to pass.

Obamatrade is not about trade, tariffs or quotas – it’s about creating ‘supranational institutions’ whose diktat trumps national governments, Congress and the states.

Given this reality, why in God’s name would anyone sworn to uphold the Constitution give President Obama the fast track power he and David Rockefeller are asking for?

Read the Congressional Record from 1967 for yourself.  Testimony by George Ball and David Rockefeller begins on page 271 of the pdf.