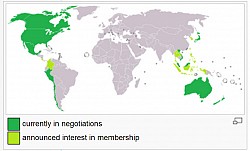 The Reason Foundation says Obamatrade is not about trade or freedom, but bigger government, stricter laws, and less accountability. Even more alarming, the agreement would shift power from the federal government to an international authority.

It can be described as a pact designed to increase the wealth and power of crony capitalists. We are facing a deal that would undermine the democratic process entirely, disenfranchising the voting public to whom our government is accountable.