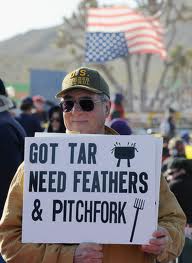 The Democratic Party’s divorce from middle class America is now official. And it’s a bitter one.

Those who still believe Democrats represent “the working man” are not listening to the highest-ranking Democrat in the land, he who happens to be the current occupant of the White House, Barack Obama.

In an interview with NPR, President Obama made it clear that Americans who depend on a job for a living are not his top priority.

But when you look at the context in which he made this remark, you see unvarnished elitism, a condescending disregard for working Americans, and a clue as to what he meant when he said he sought to fundamentally transform our country.

Asked about the resistance to admitting Syrian refugees and unrestricted Muslim immigration into the United States, Obama told the interviewer:

“When you combine that demographic change with all the economic stresses that people have been going through…because of globalization, the fact that wages and incomes have been flat-lining for some time, and that particularly blue-collar men have had a lot of trouble in this new economy, where they are no longer getting the same bargain that they got when they were going to a factory and able to support their families on a single paycheck, you combine those things and it means that there is going to be potential anger, frustration, fear…I think somebody like Mr. Trump is taking advantage of that. That’s what he’s exploiting during the course of his campaign.”

Supporting a family on a single paycheck – that used to be called the American standard of living. But Obama refers to it as a quaint anachronism, a “bargain” from a bygone era that is no more.

Should we expect “the same bargain that they got,” the standard of living working Americans once enjoyed? No, we are told. Globalization, flat-lining wages and “demographic changes” brought about by unrestricted immigration are inevitable, like the sun rising in the East. Only an undereducated fool would get angry about it, Obama tells us.

“The jobs have been gone now for 25 years and nothing’s replaced them. And they fell through the Clinton administration, and the Bush administration, and each successive administration has said that somehow these communities are gonna regenerate and they have not. And it’s not surprising then they get bitter, they cling to guns or religion or antipathy toward people who aren’t like them or anti-immigrant sentiment or anti-trade sentiment as a way to explain their frustrations.”

Only angry, bitter, frustrated losers would be anti-immigrant or anti-trade, he says.

One would be forgiven for believing the job of the president is to promote the well being of the citizens of the United States.

But this president has signed on to the open borders vision of the United Nations which says workers should be able to move as freely between Mexico and Chicago as they now move between New York and Phoenix, that people, goods and money should flow freely in a borderless world.

The president and his cohort in Washington are committed not to a national economy, but to the “new economy” that serves elite donors at global corporations, American in name only. This cabal wants carte blanche to exploit cheap labor wherever and however they find it, whether by importing unlimited numbers of people via unrestricted immigration or by exporting America’s productive assets via wholesale outsourcing.

The blue-collar men who “have had a lot of trouble in this new economy” understand that unrestricted immigration and so-called “free trade” are two sides of the same coin, one that has left them shortchanged.

In 2014, white working class men and women voted overwhelmingly for Republican House candidates, just as they did in 2010.

But now it’s clear the GOP establishment has joined the Democratic Party in divorcing itself from the interests of working Americans.

Paul Ryan and Mitch McConnell led the charge for Obamatrade, and Ryan and Marco Rubio are doing everything in their power to bring virtually unlimited numbers of foreign workers into this country.

White blue-collar voters know both parties have sold them out.

And that’s why they are supporting Donald Trump.