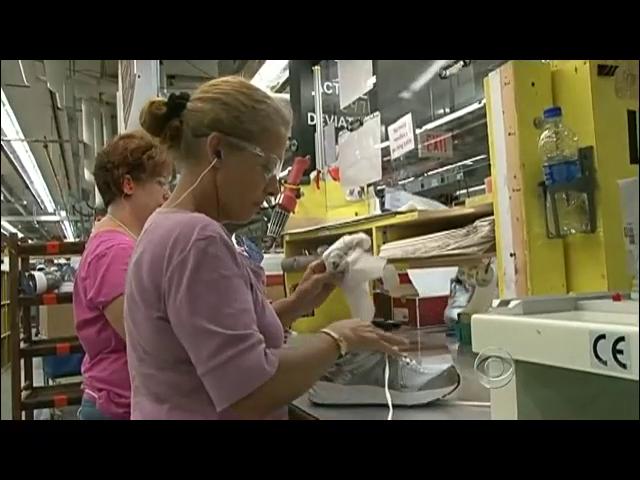 The White House is selling Obamatrade aka fast track for the TransPacific Partnership with the equivalent of ‘If you like your job you can keep it.” The president claims Obamatrade will create jobs, protect workers and open new markets for products made in the USA. But the exact opposite is true. Meet some Americans who will be out of work if Obamatrade comes to pass.

These Americans work for New Balance, the last company making athletic shoes in the US. While most of their production is done overseas, New Balance

has more people making shoes in the U.S. than it ever has. Matt LeBretton, public affairs director at New Balance, says the company employs about 1,350 people among its five factories: 800 among three Maine plants, nearly 400 in Lawrence and about 150 at a Boston factory. Collectively, this workforce churns out some 7 million pairs of shoes a year. …

Owners Jim and Anne Davis remain strong believers in the importance of domestic factory jobs, LeBretton says. New Balance executives are outspoken about the positive impact these jobs have on our local economies. The company also champions a fight in Washington to require the U.S. military to buy athletic shoes from a domestic manufacturer, just like every other article of clothing worn by our troops.

Unfortunately, not everyone shares Jim and Anne Davis’ commitment to their fellow countrymen and women. Nike would like to see American jobs go down the toilet with a woosh.

Nike and New Balance are at opposite ends of the table on this issue — and nothing less than the future of footwear manufacturing in the United States hangs in the balance. Nike executives want to see tariffs lifted on footwear made in Vietnam through what’s known as the Trans-Pacific Partnership talks, while New Balance is fighting to keep those tariffs in place.

Nike is already sourcing goods from Vietnam and would like to further expand its business dealings with a corrupt Communist one-party state that persecutes Christians and anyone who believes in political and religious freedom.

Nike is in league with China, the most polluted nation on earth and a dictatorship whose ruling elites are pouring money into Vietnam, hoping to use its cheap labor to produce goods to sell in the US.

Everyone who cares about American values, American jobs and religious freedom must stop Obamatrade.

Contact Congress now and tell your representatives to say “No” to fast track trade promotion authority for Obama.

Want to know why we must stop Obamatrade? Watch the video below and see the Maine community where New Balance has a factory.

It’s a picture postcard of small-town America that embodies the values of family and hard work that made this country great – and that Obamatrade will destroy.